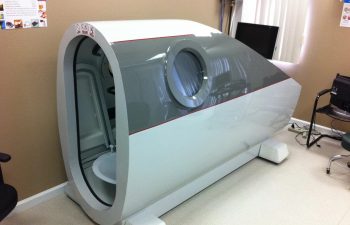 In hyperbaric oxygen therapy, or HBOT, oxygen-rich plasma is injected into tissues depleted of oxygen. Wound injuries damage the body’s blood vessels, which release fluid that leaks into the tissues and causes swelling.Swelling robs the damaged cells of oxygen, which leads to tissue death. While reducing swelling, HBOT floods the tissues with oxygen. The elevated pressure in the chamber increases the amount of oxygen in the blood. HBOT aims to break the cycle of swelling, oxygen starvation and tissue death.

Extra oxygen carried by your blood assists your body in fighting bacteria, as well as releasing growth factors and stem cells that contribute to healing.

When your body’s tissues are injured, they require even more oxygen to survive. Hyperbaric oxygen therapy increases the amount of oxygen your blood can carry. With repeated scheduled treatments, the temporary extra high oxygen levels encourage normal tissue oxygen levels, even after the therapy is completed.

Hyperbaric oxygen therapy is a type of treatment used to speed up the healing of carbon monoxide poisoning, gangrene, stubborn wounds and infections in which tissues are starved for oxygen.

The goal is to fill the blood with enough oxygen to repair tissues and restore normal body function. It has also been approved for more than a dozen conditions ranging from burns to bone disease.

If you suffer from any of these conditions, contact Aura Spa in Beverly Hills today for a free consultation on how oxygen therapy may help you.

Dr. Talei has been consulted as an expert resource by numerous media outlets, including: